My novel this year is a western with some erotica. Yes, I know, I’ve tried writing a western before, but this time at least one, maybe more, of the characters came from my other effort of trying to write a western.

Tracy, my heroine, is forced to leave the ranch where she grew up, because of her new step-father. Tracy’s father had been killed in the Civil War, and the year is now 1865, give or take a year.

Tracy does some buying in town in secret, secret to everyone except her mother, who provided Tracy the money needed to buy whatever she needed.

On the night it was time for her to leave, she saddled her black stallion and put a pack of provisions on her chestnut mare. Tracy led the horses away from the house as quietly as she could. The mare’s foal gave a soft whinny when he (or she) saw her/his mother being led away.

Tracy quickly put a small halter on the foal and tied it to the pack the mare was carrying. It wasn’t as if she was afraid the foal would run away, because Tracy knew that wouldn’t happen. Not until the foal was no longer getting his/her food from the milk the mare was making for her foal.

I’m not sure of the gender of the foal or what color s/he is. If anyone has any ideas, let me know. 🙂

As for Tracy, she has some adventures ahead of her during her flight from her abusive step-father.

Lately I’ve been able to get a few ideas for the first novel in the series. I won’t list them all here, but I have made some progress at least.

I need to continue working on the novel with the new ideas in mind.

A heroic builder has told how he was “terrified” as he fought to resuscitate a stranger’s unconscious child in an Australian supermarket.

CCTV footage shows Rowan O’Neill leaping to the rescue of two-year-old Shaylar Collard, who had collapsed and was not breathing.

“I was just doing some shopping (and) the mother came by and starting screaming: ‘Somebody help me, my baby, my baby’s not breathing’,” he said.

Mr O’Neill said he had received basic training in resuscitation while at school but thought he had forgotten what to do.

“I was very terrified,” he said. “It was one of those situations where you don’t know how it’s going to turn out. It’s the best possible outcome we could have hoped for at…

Ma’am. I Think This Belongs to You.

Tonight my daughter and I were eating at our downtown McDonald’s. Because of its close proximity to the Rescue Mission and the Greyhound bus station it has become a hang out for the homeless. As we were leaving I noticed a mother with her two children entering McDonald’s from the direction of the bus station. She was dragging a heavy piece of luggage and the kids were wearing fully loaded backpacks. I instantly thought about buying dinner for them but I was running late to my daughter’s dance class and already half way out of the parking lot.

After dropping my daughter off to her class I could not stop thinking about that mother and her kids. I drove around until I found them huddled together in the dark outside of the bus station. I started to get…

Redditor, ‘Dudurin’ wrote:
“The guys house caught fire and the troopers GPS unit jammed while he was driving out there. The drive to their house was MUCH farther then the .gif depicts.

I can’t find the original video in where I saw it, but there it was stated the dogs owner was standing outside of the house as it was burning and said to the dog: “Buddy, we need to get help.” It was only at this point that the dog ran off until it found the trooper. It’s somewhere around this point that the gif begins and the dog starts running back home (Also note that there’s a good chunk of video missing in the image). The trooper stated that the dog on numerous occasions looked over it’s shoulder and slowed down if the distance between them was too far, as if to make sure that he was following…

When Bibi the tiny Maltese-shitzu cross was blown off a pier in gale-force winds, his despairing owner Sue Drummond feared the worst. 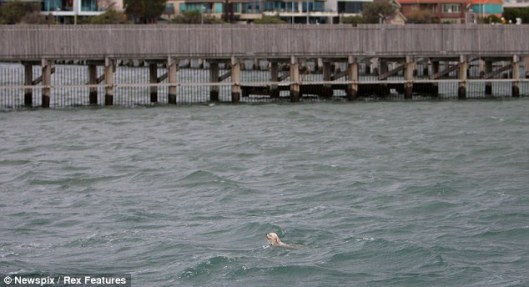 Tiny speck: Bibi is tossed around in Melbourne’s bay after he was blown off Brighton pier by gale-force winds

But salvation came in a most unlikely form – a 20-year-old man who was on Brighton pier to scatter his grandmother’s ashes into the bay in Melbourne, Australia.

‘I thought I’d never see him again’: Owner Sue Drummond watches helplessly as Bibi tries to dog-paddle back to shore

As he was paying his respects, a quick-thinking Raden Soemawinata spotted a desperate Bibi, and stripped down to his shirt and underpants to dive after the terrified dog. 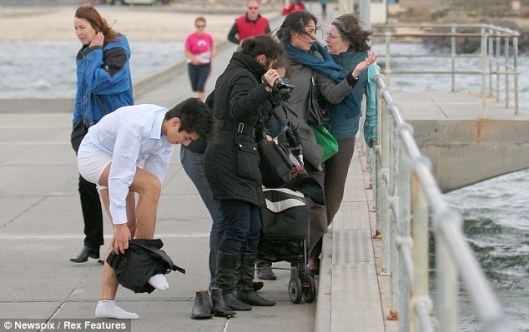 To the rescue: Raden Soemawinata takes off his suit as he prepares to jump off the pier to save the Maltese-shitzu cross

Carver Police Officer David Harriman is being hailed a hero after this photo of him went viral this week.

The photo shows him moments after diving under eight feet of murky water to save a dog trapped in a submerged pickup truck, emerging from the water carrying the dog he just saved from drowning.

The rescue happened after 59-year-old Debra Titus of Plymouth, MA drove her 2004 Toyota Tacoma pickup truck with her two dogs inside into a lake at South Meadow village. The Plymouth woman and one of her dogs were able to get out of the car and to safety but the other dog, Moochie, was still inside the completely submerged vehicle when Officer David Harriman, a dog lover, dove into the water and was able to open the truck door and rescue the dog. Carver Police Department later said that Moochie was shaken up but in good health.

A photo demonstrating the bond between a man and his dog broke hearts across the Internet.The picture shows Figo, a K-9 officer, paying his last respects at the funeral of his fallen human partner, Kentucky police officer Jason Ellis.
In the photo, Figo lays a paw on Ellis’s casket. The 33-year-old Ellis was killed in a suspected ambush.

The picture generated hundreds of comments after being posted on Reddit.

“Dogs can actually smell when someone or something is dead and it gives them closure. Not sure if he can tell it’s him through the coffin, but he should,” wrote one Reddit user.

Figo was retired after his partner’s death and is now living with Ellis’ family. Bardstown, Ky., police chief Rick McCubbin told the Associated Press said that the dog and Ellis were “true partners.” Posted by Amy P. Reed | Filed under Beyond Blue Ridge

Do you know what your plot will be? I don’t … yet. I need to get a Muse tracked down soon though or Nov. 1 will be here and I’ll be stumbling in the dark. October is over half over, so I need to come up with something soon. LOL

I’ve been thinking about using a photograph of a road and speculating where it goes and who/what I’ll meet along the way.

Suggestions would be welcome. I think what I could use is a good brainstorming session with someone to bounce ideas off of.

Well, it’s late, and my back is starting to hurt worse, so I’d better go lay down and try to relax it. Pain meds come to mind. LOL

Happy brainstorming, plotting, pantsting and writing. I’ll do my best to update this blog as I go along.

A Constant Writer and Aspiring Author of Fantasy

My journal of big words and pretty pictures

I get paid to make stuff up.

The Dystopian Nation of City-State

Putting the "prod" in productivity, and the "pro" in procrastination.

Founder of the Three Things Method of Storytelling

The latest news on WordPress.com and the WordPress community.